Villa 22 used to be a one-storey high dwelling originally built in the 1930-ies. At the time it served as a residential house for common Albanian families. Over the last years it has grown into a three-floor building designed to become a three star hotel. The hotel lies in one of the main city center streets welcoming you firstly to its relaxing and stylish bar. The front yard then accompanies you to the hotel reception where you can comfortably sit and chat to our staff during the check in service. The hotel lobby is the first contact to the warm and friendly atmosphere where warm colors and the well decorated rooms make you feel at home. Our hotel can offer both private and public areas for seating, relaxing, or even working. Even the most important sights are to be found within a walking distance from the residence.
Villa 22 is the right choice for visitors who are searching for a combination of charm, peace and quiet, and a convenient position from which to explore Tirana. 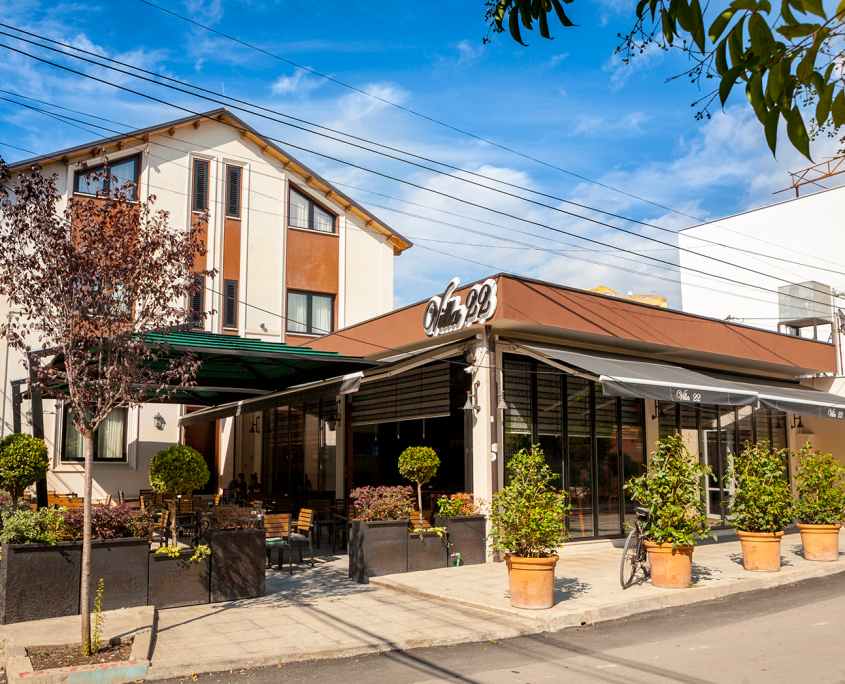 Interest in Balkan countries has soared significantly in recent years, with curious travelers now regularly seeking out the serenity of the Adriatic Sea and medieval, stone-walled cities like Dubrovnik in Croatia and Kotor in Montenegro. Tirana does not embody such traditional, picturesque allure. Instead, it impresses as a soulful, urban hub with a strong personality shaped by a turbulent history.

Until the fall of Communism in 1991, the region was no stranger to socialism. But Albania’s strain, under the leadership of the Stalinist-Maoist, teacher turned dictator Enver Hoxha, was especially concentrated and oppressive. Extremely paranoid, he ordered the construction of more than 750,000 bunkers—dome-shaped, concrete salves meant to assuage his chronic fear of foreign invasion. Delving into this twisted past is essential to understand present-day Tirana, and a prime starting point is the National History Museum on Skanderbeg Square, a chronologically organized trove of archaeological artifacts. Even more gripping is Bunk’Art, one of those covert, nuclear war–proof bunkers on the hillside fringes of Tirana that has been transformed into a museum. Here, in a warren of galleries, wander through Hoxha’s preserved clubby office, and watch a hypnotic video of his funeral. In the city center is the Bunk’Art 2 outpost, a memorial to victims of the Hoxha regime packed with more insightful photographs and documents. It’s fittingly located across the street from House of Leaves.

This website uses cookies to improve your experience. We'll assume you're ok with this, but you can opt-out if you wish.Accept Read More
Privacy & Cookies Policy
We use cookies to ensure that we give you the best experience on our website. If you continue to use this site we will assume that you are happy with it.Ok
Scroll to top